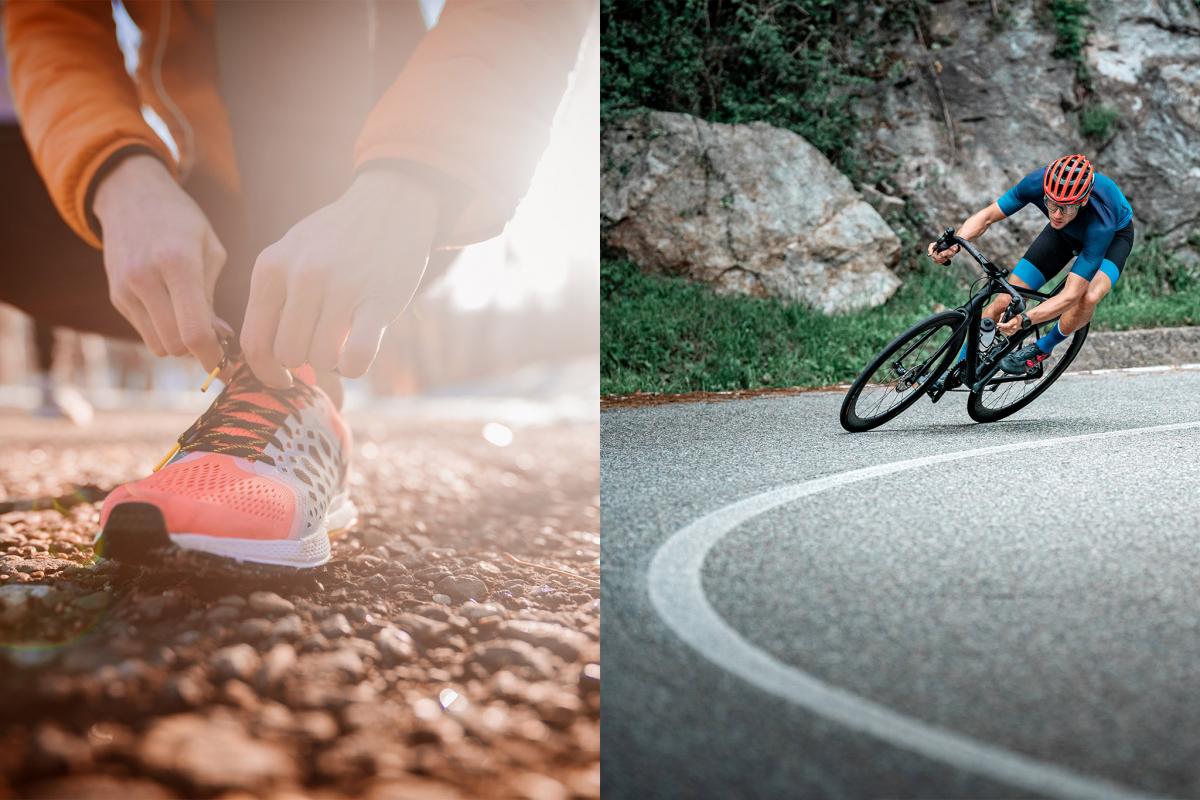 Running or Cycling? Tailor Your Off-season Training for a Successful 2021

28th October 2020
Share
Cycling and running are common off-season training modes for maintaining or building aerobic fitness, but which is best? Allsports looks at the evidence…

One of the most common questions asked by sportsmen and women participating in a wide range of sports and who are looking to develop higher or maintain levels of aerobic fitness is which mode of training will produce the best results? Without doubt, the two most common modes of supplementary aerobic training are running and cycling (either outdoor cycling or on a stationary bike), but which is best? There’s no simple answer of course as each training mode has its own pros and cons.

Running requires little extra equipment other than decent running shoes and is arguably a much more agreeable training mode than cycling when the weather deteriorates, which for many northern hemisphere readers is imminent as winter approaches. Running is also a very efficient training mode in terms of fitness gains per hour of total time invested. Other than lacing up some running shoes, there’s no preparation required. Cycling outdoors however requires a bit more time to allow for more kit to be donned (helmet, gloves, shoes, padded shorts or leggings), bike maintenance etc. But both are more efficient than swimming, where much of the time invested is spent travelling to and from the pool and changing/getting dressed. 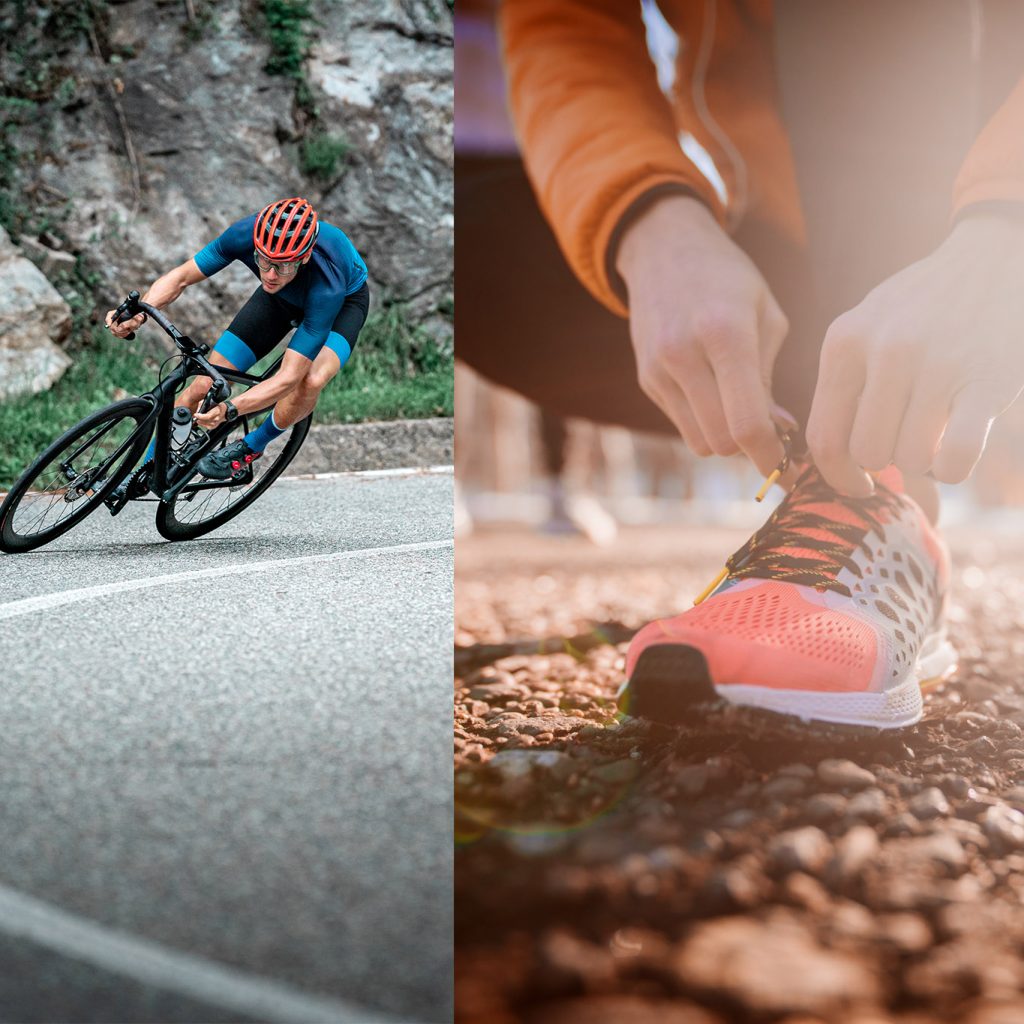 Efficacy of running vs. cycling

The principle of training specificity suggests that for maximum fitness and performance gains, the type of training an athlete undertakes should replicate the movements/locomotion/pattern of muscle use required in his/her actual sport as closely as possible.

This explains why runners need to perform running training (and not focus on other training modes such as cycling/rowing etc) to run well in competition. Likewise, cyclists should primarily cycle and swimmers primarily swim. But what about other sportsmen and women who merely want to use an aerobic training mode as a tool to build aerobic fitness?

Although both running and cycling can be used to develop aerobic fitness in other sports – a so-called ‘transfer of training effect – research suggests that there are differences. Studies on triathletes for example have found that when both modes of training are employed, there is more physiological training transfer from running to cycling than vice versa. An example of this effect has been observed in studies on speed skaters; the muscle recruitment and loading patterns during skating are more closely replicated during cycling than running. Therefore, we would expect cycling training to elicit a greater transfer of training effect in terms of aerobic gains and performance than running.

Skating over the truth

However, research by German scientists suggests otherwise. In a study designed to compare the effects of cycling and running training programs on inline speed skaters’ endurance performance, 16 high-level athletes were randomly assigned to one of two groups – running or cycling. Both groups trained twice a week for eight weeks, one group on a treadmill and the other on a cycle ergometer. Training intensity and durations were set to be equal between the two groups and before and after the training intervention, all the athletes performed an incremental sport-specific (inline speed skating) and one non-specific (cycling or running) graded exercise test according to the group affiliation.

Before and after the training intervention, all athletes performed an incremental specific (inline speed skating) and one nonspecific (cycling or running) step test according to the group affiliation. The post-intervention testing showed that both groups increased their maximal aerobic capacity and their aerobic efficiency at sub-maximal efforts. Importantly however, there was no difference in subsequent performance between the two interventions – ie the cycling intervention was not more effective as might be explained by the specificity of training principle.

Interestingly, another study by the same group of scientists published the same year investigated the effects of using running or cycling to improve sprint performance in skaters. Using the same overall structure as described above, 16 elite athletes were randomly assigned into two training groups performing either two sessions per week for eight weeks of treadmill running or ergometer cycling, in addition to three skating-specific training sessions (consisting of technique, plyometrics and parkour – the same for both groups). Subsequent testing showed that parameters of sprint performance such as acceleration and speed were increased equally across two groups. The results also found that the skaters who had performed running training relied more heavily on fat metabolism during subsequent testing, suggesting that running training could be more beneficial when body fat reduction/improvements in power-to-weight ratio are sought.

From the above, you might have already concluded that the potential advantages of running training outweigh those of cycling. However, it is worth pointing out that cycling is still a great fitness builder and can still offer a lot of potential advantages. In particular, the smooth pedalling action and weight bearing nature of the exercise is much easier on the joints, which results in a lower risk of injury.

An insightful study on triathletes illustrates this well. Using an online survey, 212 triathletes retrospectively answered a questionnaire about their training habits and injuries during the previous 12 months. Most injuries occurred during running (50%) followed by cycling (43%) and swimming (7%). On the face of it, you might conclude that the injury risk from running and cycling were similar. However, the study found that many of the cycling injuries occurred as a result of spills from the bike – not from the pedalling itself. Moreover, due to the demands of the event (a relatively long cycling leg) most of the triathletes spent significantly more time on the bike than running, further widening the gap. Another point worth mentioning is that because cycling also a great way to get from A to B, it can be readily integrated into a daily routine in the form of commuting.

When the training load increases

All types of exercise bring their own challenges, especially when it comes to physiological impact and the implications for recovery. And when the training volume increases, research suggests that cycling seems to confer an additional advantage over running. In a study by scientists at the Appalachian State University in North Carolina, researchers compared the levels of exercise-induced muscle damage, soreness and inflammation in cyclists and runners who were asked to perform a 3-day period of intensified training. To do this, 13 trained long-distance runners and 22 trained cyclists were monitored for a period of 12 weeks. During this period, the runners and cyclists continued with their normal training but during the fifth week, subjects from both the groups went to the lab and ran or cycled for 2 ½ hours for three consecutive days, which represented a very significant increase over their normal training volumes. Both the runners and the cyclists exercised at 70% of their maximum oxygen uptake (ie a moderate-intensity pace) and both groups had blood samples taken before and after the 3-day period to test for markers of muscle damage, inflammation and immunity. The subjects also reported on the degree of delayed onset muscle soreness (DOMS) they experienced.

The results showed that despite the identically increased workloads and durations, the runners’ muscles had taken a big hit compared to those of the cyclists. The markers of muscle damage were 133-404% higher in the runners compared to the cyclists. The runners also had inflammation markers that were up to 256% higher. Moreover, the runners reported a level of DOMS that was 87% higher than their cycling counterparts. When it came to immune markers, both groups suffered a drop in immunity of about the same magnitude – ie there was no significant difference between the runners and cyclists.

What this study shows is that even at moderate intensities, running causes far more muscle tissue breakdown and inflammation than does cycling – something that partly explains why endurance runners generally have much weaker and less powerful leg muscles than their cycling counterparts, and maybe also why runners are more prone to injury. Another implication concerns athletes who participate in sports demanding good strength levels; if running is used as an ancillary training mode, athletes should keep the length of their runs relatively short in order to minimise muscle tissue breakdown and strength/power losses on the bike.

When it came to immune markers, both groups suffered a drop in immunity of about the same magnitude – ie there was no significant difference between the runners and cyclists.

Both running and cycling are useful training modes to maintain and develop aerobic fitness during the off season (or at other times for that matter). However, there are differences. Running seems to have a greater transfer of training effect than cycling. In short, if your sport involves a lot of running around, running may be more time effective than cycling. It may also be a better choice where weight control/reduction is important too. Even in sports such as rowing, skating and cycling (ie more ‘cycling-like’), running training is likely to be an effective training mode.

There are significant downsides to running however. Athletes who are prone to injury may prefer to use cycling, with its inherently lower injury risk. Likewise, athletes who need to maintain good levels of strength may prefer to cycle in order to avoid unnecessary muscle damage and muscle tissue loss. Cycling also offers an advantage where athletes are still performing other activities where muscle damage/soreness would be a disadvantage, such as skills training or lower-body strength training. Using the information above, you will hopefully be able to see which training mode will work best for you!