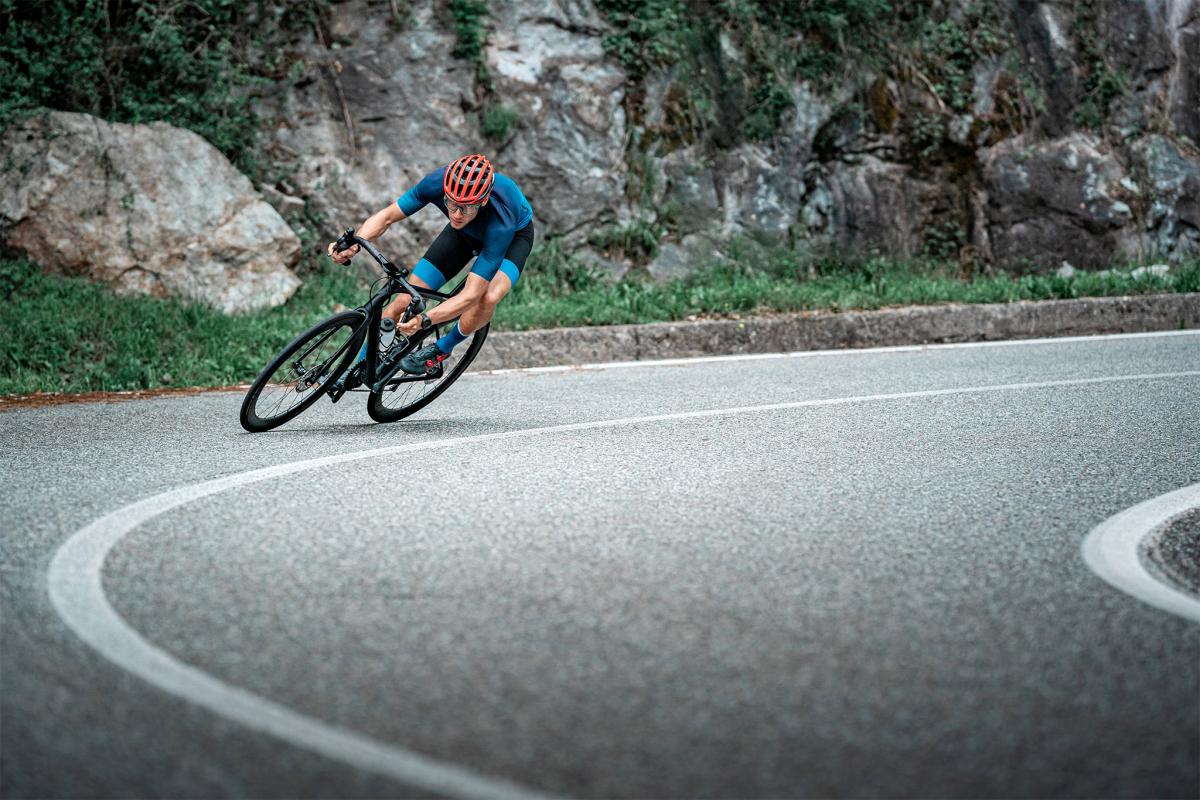 Many words have been written about the importance of cycling aerodynamics, and much cash has been expended by many cyclists on exotic/expensive aero-friendly bikes and their associated components in the search for a few saved seconds. Whilst this is understandable, the focus on aero equipment makes little sense if the rider doesn’t first begin by addressing the fundamentals of cycling aerodynamics – the riding position.

Why is a cyclist’s riding position so important? Well, as all cyclists will (or should!) know, most of the energy expended on the bike is required to overcome wind resistance. An aerodynamic riding position that minimises wind drag is therefore critical to performance. A rider interfaces with the bike at three points – the handlebars, the saddle and the pedals – and of these, the handlebars are most critical in terms of aerodynamics.

Apart from enabling a rider to execute safe and effective steering and braking, the handlebars serve another important role, which is to help provide support and stabilise the torso while allowing for efficient rib and diaphragm movement during the breathing process. However, it’s the height of the handlebars and the position of the hands on the handlebars that have a really profound effect on cycling efficiency, principally because together, they dictate the torso angle.

Aerodynamic drag on the bike is strongly influenced by torso angle. In a nutshell, the more upright the riding position, the higher the drag experienced. In simple terms, decreasing the torso angle (ie lowering the chest closer towards to handlebars and/or lowering the handlebar height) reduces drag, helping you to ride faster. You might think therefore that the best riding position is with your chest flat on the bars.

However, good research has shown that riding too low can be counterproductive. That’s because as torso angle decreases and a rider’s chest gets very close to the bars, the biomechanics of the human body means that power production in the thighs and buttocks become less efficient – ie it becomes harder to maintain the same power output.

In an excellent 2014 study, scientists used computer modelling to predict how speed and torso angle affected the energy requirements of time trial cyclists. The models were fed with data collected from 19 time trial cyclists sitting at four different torso angle positions – 0 (horizontal), 8, 16 and 24 degrees (a more upright position). The results showed that at all angles, the aerodynamic gains outweighed the power losses only when cycling speeds exceeded 28.5mph, meaning that it’s better to get down low, even if that does make it a bit more difficult to produce power.

However, even at these high speeds, a completely horizontal torso was not the fastest, an 8-degree angle producing even lower drag than horizontal. Conversely, for speeds below 18.5mph, a more upright riding position nearer to 24 degrees was preferred. In this position, cyclists could maximise the efficiency of power production without paying too high a price in terms of drag.

The role of arm position

Whilst torso angle is an important factor in determining the amount of drag a rider experiences, there’s more to it than that because the position of the arms – and in particular the elbows – also makes a significant difference, even when the torso angle remains constant. How much difference? Well, some new research suggests that optimising arm and elbow position is actually far more important than torso angle alone – for example whether the rider positions his/her hands on the handlebar tops or drops.

In a study carried out by Portuguese scientists, and published just a few weeks ago, researchers investigated the impact on aerodynamic drag and energy expenditure when riding upright on the bar tops and in the drop position. But they also added a third condition into the mix – riding on the elbows in a time-trial position (see figure 1). Note how in this elbow position, the torso angle was similar to and only slightly lower than the dropped position.

good research has shown that riding too low can be counterproductive 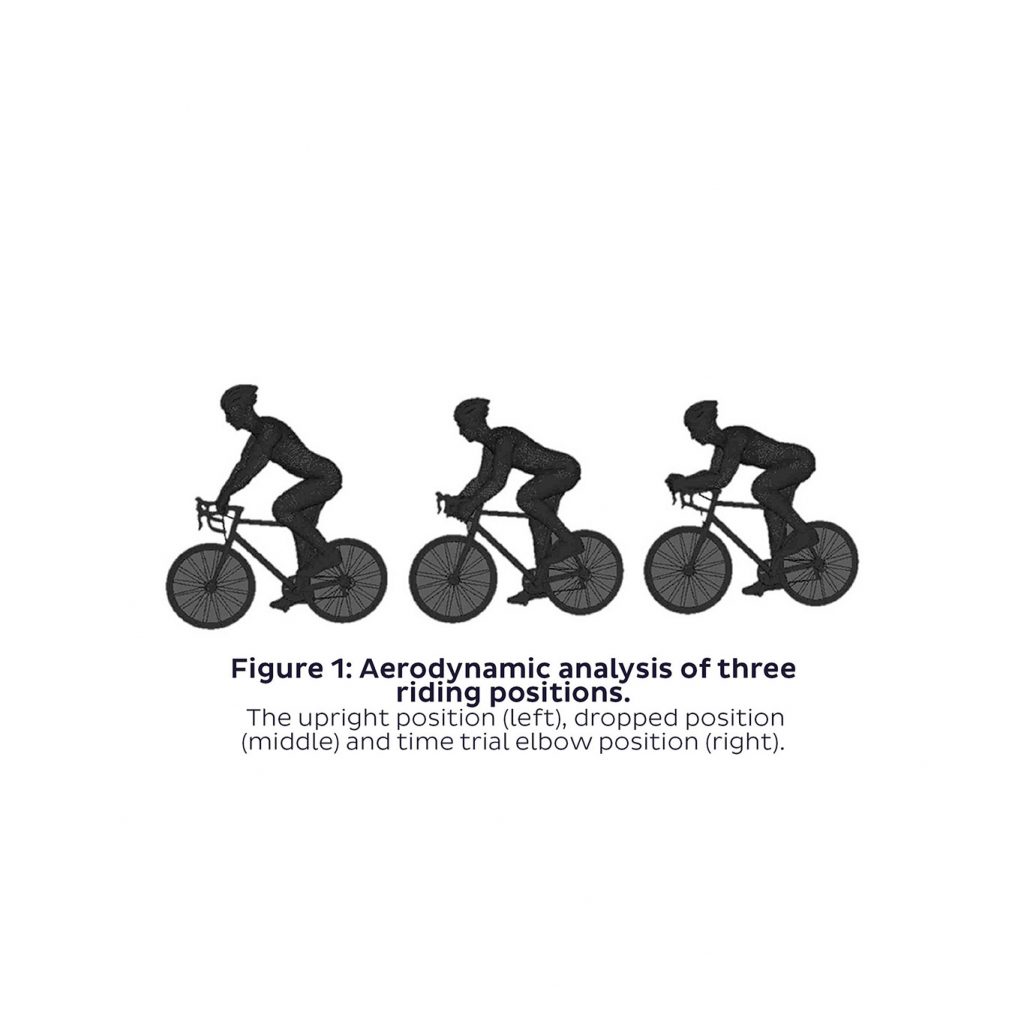 To do this, an elite-level road cyclist competing at a national level was recruited. The subject was scanned using a ‘Sense 3D scanner’ on his competition bicycle while wearing racing gear and helmet. The scans were made with the rider in the upright, dropped and elbows position. Following the scans, the data was entered into a computer for numerical simulations using computer fluid dynamics to assess the coefficient of drag in each position and at different riding speeds. This was then used to determine energy expenditures and riding efficiencies. 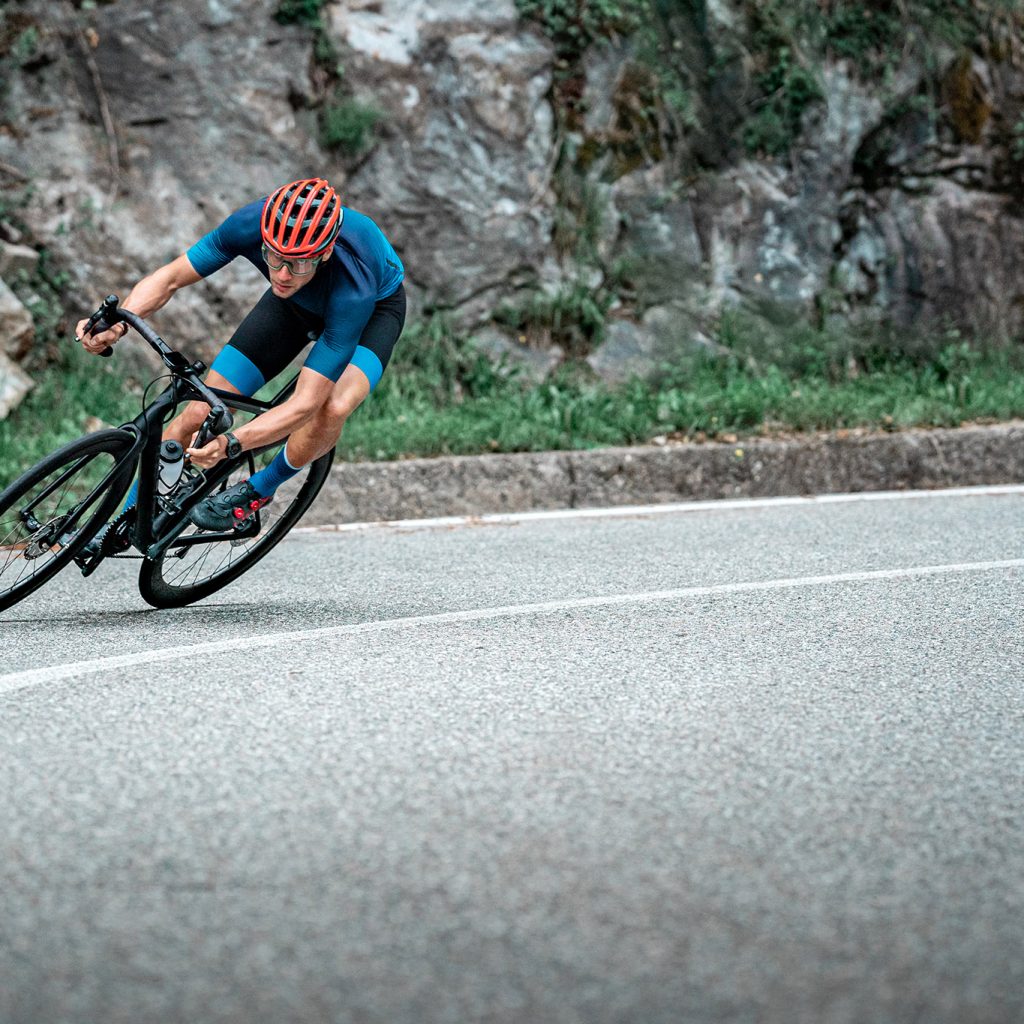 The first finding was that the effective surface area of the rider (ie the surface area interacting with wind resistance as the rider moves through the air) was 0.332 sq/m in the upright position and 0.327 sq/m in the dropped position. However, when riding on the elbows, this dropped to 0.261 sq/m – a big reduction. As you can see in figure 2, this had a profound effect on drag, especially at higher speeds where the tucked-in elbows position resulted in far less drag through the air then either of the other two positions. 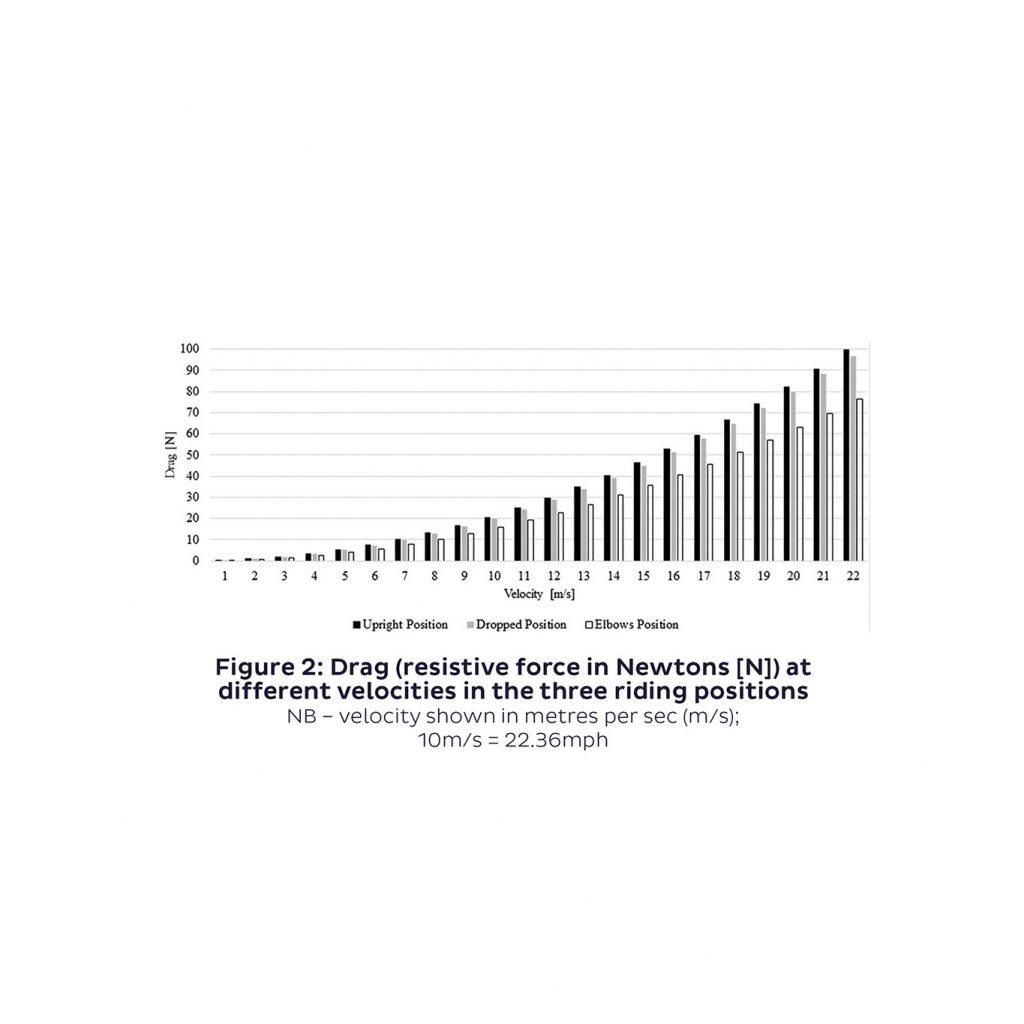 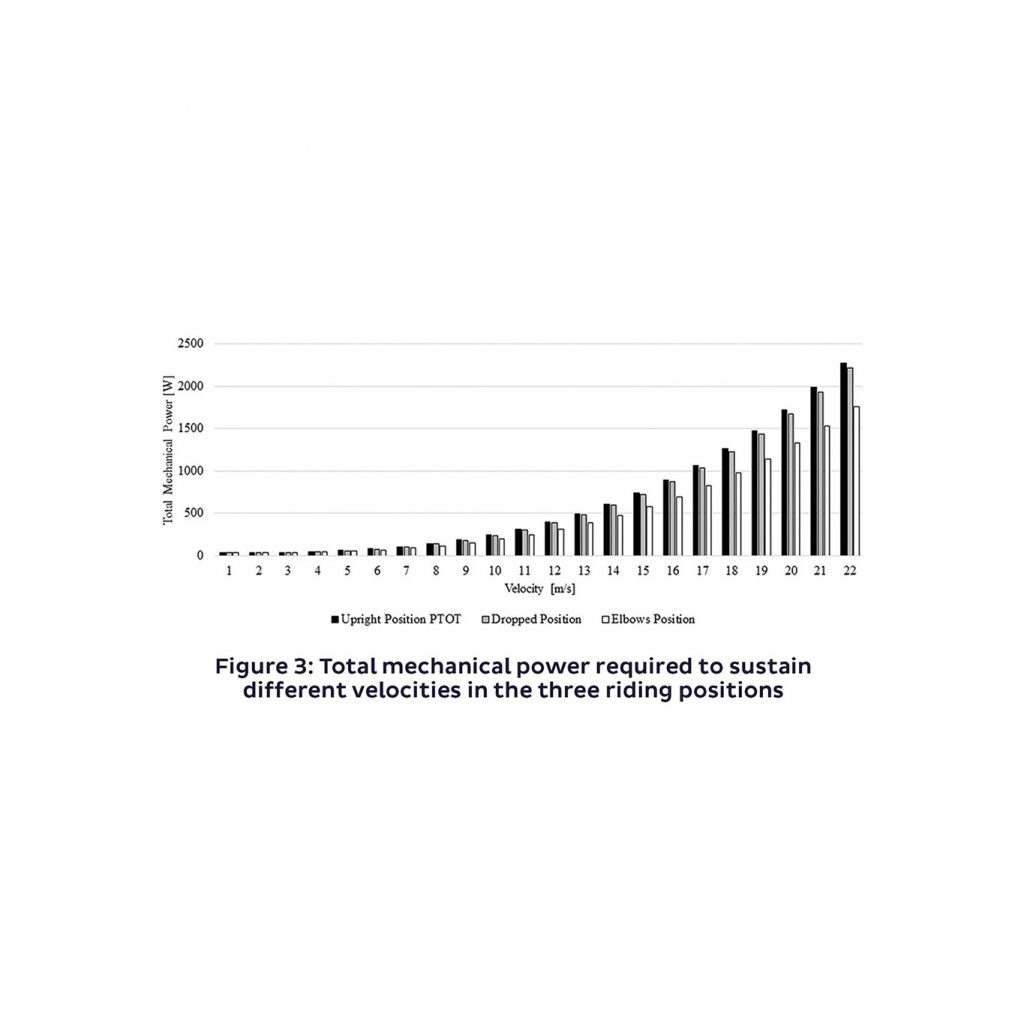 The knock-on impact for the times required to complete a given distance are equally stark. Using the example of total energy cost over an Olympic event (typically 220–250 km) and translating this into the typical speeds recorded over these distances (around 11m/s or 24.5mph), calculations showed that the riding position that required longest estimated time of arrival to the finish line was the upright position followed by the dropped and then the elbows position, which was quickest. In the upright position, the cyclist would take around 5h:24mins; in the drops position, this would fall to 5h:03mins, whilst in the elbows position, the time would be slashed massively down to just 4h:23mins! 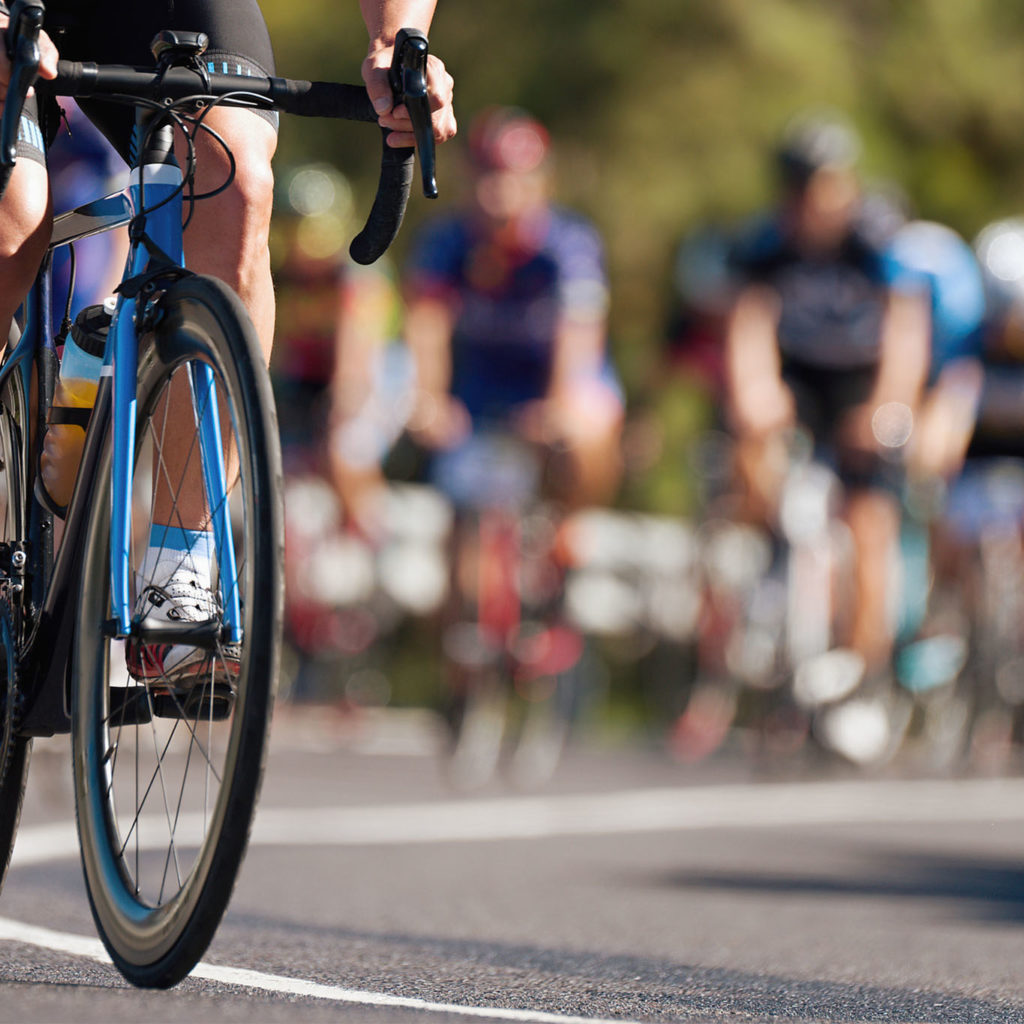 Of course, the average amateur cyclist will typically average lower speeds than an elite rider, and ride over shorter distances. But the time-saving gains would still very significant even for (as an example) an amateur averaging 18mph over a 100km sportive event riding in the elbows position – likely into double digit minute savings.

In particular, the elbows position minimises drag and energy cost, leading to enhanced efficiency and improving the winning time.

There were limitations to this study – namely that only one cyclist was scanned, and the data obtained was used to represent how cyclists in general would experience aerodynamic drag in the different riding positions. Also, while the scanning took place with a helmet and clothing worn, different helmet and clothing designs might have produced slightly different scanning data. However, the drag values calculated in the upright and drops position are closely aligned with findings from previous studies in the literature, adding validity to these findings.

The key message for cyclists therefore is that they should be aware that reducing your frontal drag surface area is critically important and elbow/arm position plays a big role in this. In particular, the elbows position minimises drag and energy cost, leading to enhanced efficiency and improving the winning time. Wherever possible, you should adopt an elbows position when racing or time trialling for the fastest possible times!