Triathletes are drawn to the sport for a variety of reasons. One of the most common is that athletes see it as a great ‘all-round’ cross-training sport and that by spreading the training load across the body, higher levels of fitness can be achieved with less chance of injury than a comparable training load in just one of the three disciplines. Indeed, many accomplished triathletes have migrated to the sport following recurrent or chronic injuries. Even among swimmers, a sport normally associated with a low risk of injury, research shows that adding cross training modalities reduces the risk of injury further still.

With the above in mind, you might think that the risk of injury as a triathlete is low. However data from studies indicate that the physical burden of triathlon training is more than the sum of its component sports. At more elite levels of competition in particular, the high training volumes and the intense physical stress of competition place high demands on the athletes’ bodies. As a result, sport-related acute and overuse injuries are actually more common in triathletes than most believe; depending on which study you look at, the prevalence of injury is estimated to be anywhere from 37-91% over the course of a year.

More evidence of risk for triathletes

A new study on 174 triathletes competing in the Triathlon Club Portuguese Championship provides yet more evidence that despite the cross-training nature of the sport, triathletes who undertake training for competitive events are at significant risk of injury. Published in the journal Revista da Associacao Medica Brasileira, the Brazilian scientists investigated the epidemiology of musculoskeletal injuries in triathletes who participated in the Triathlon Club National Championship (Olympic Triathlon format) held in the South of Portugal.

To carry out the analysis, the enrolled athletes who had presented with an injury in the previous 12 months were asked to fill in a carefully developed questionnaire regarding the injury characteristics. The athletes were allowed to specify the characteristics of a maximum of three injuries (those considered most serious and/or needed more time for recovery) for all sports (swimming, cycling and running). As well as describing the injury (and any treatment), the athletes were asked to provide information as to how that injury had occurred.

In terms of causal factors, overtraining (43.1%) was blamed as the mechanism that led to the highest occurrence of injuries. 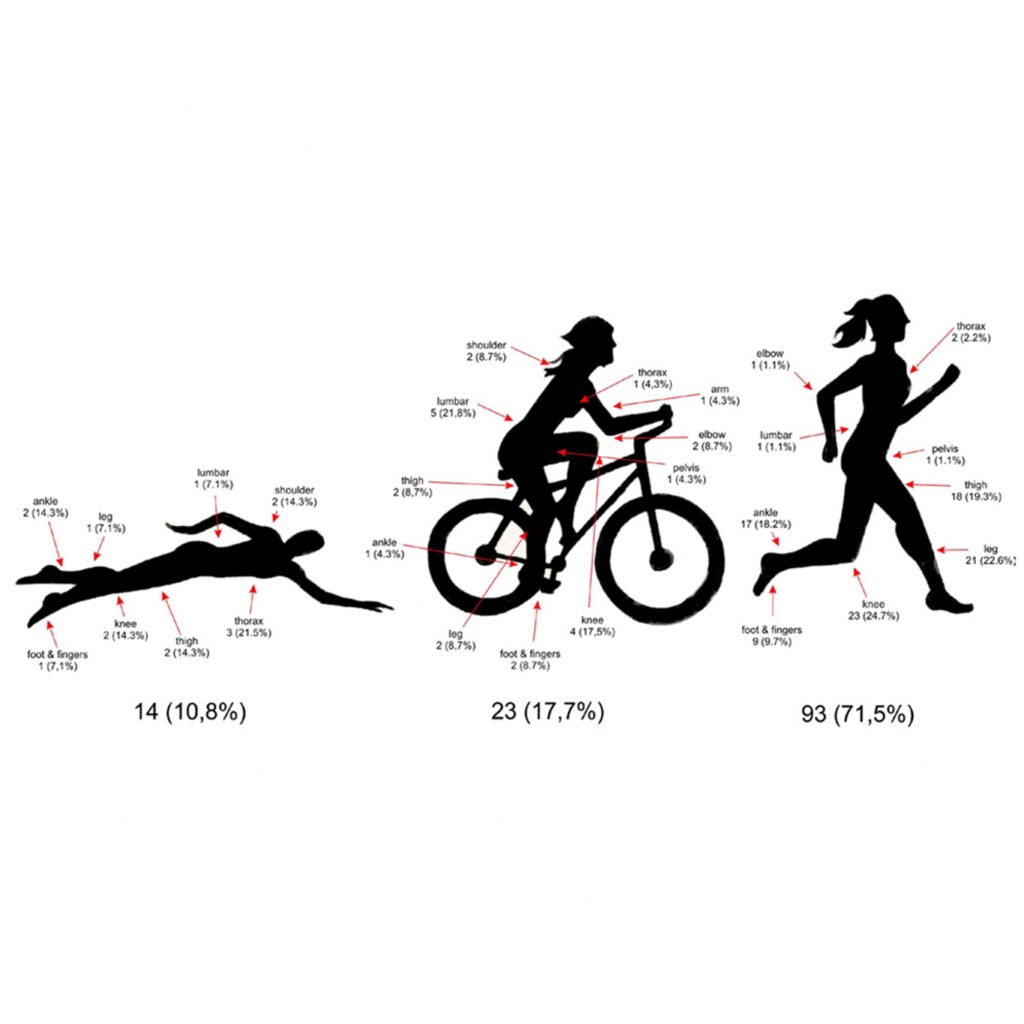 The key findings were as follows: 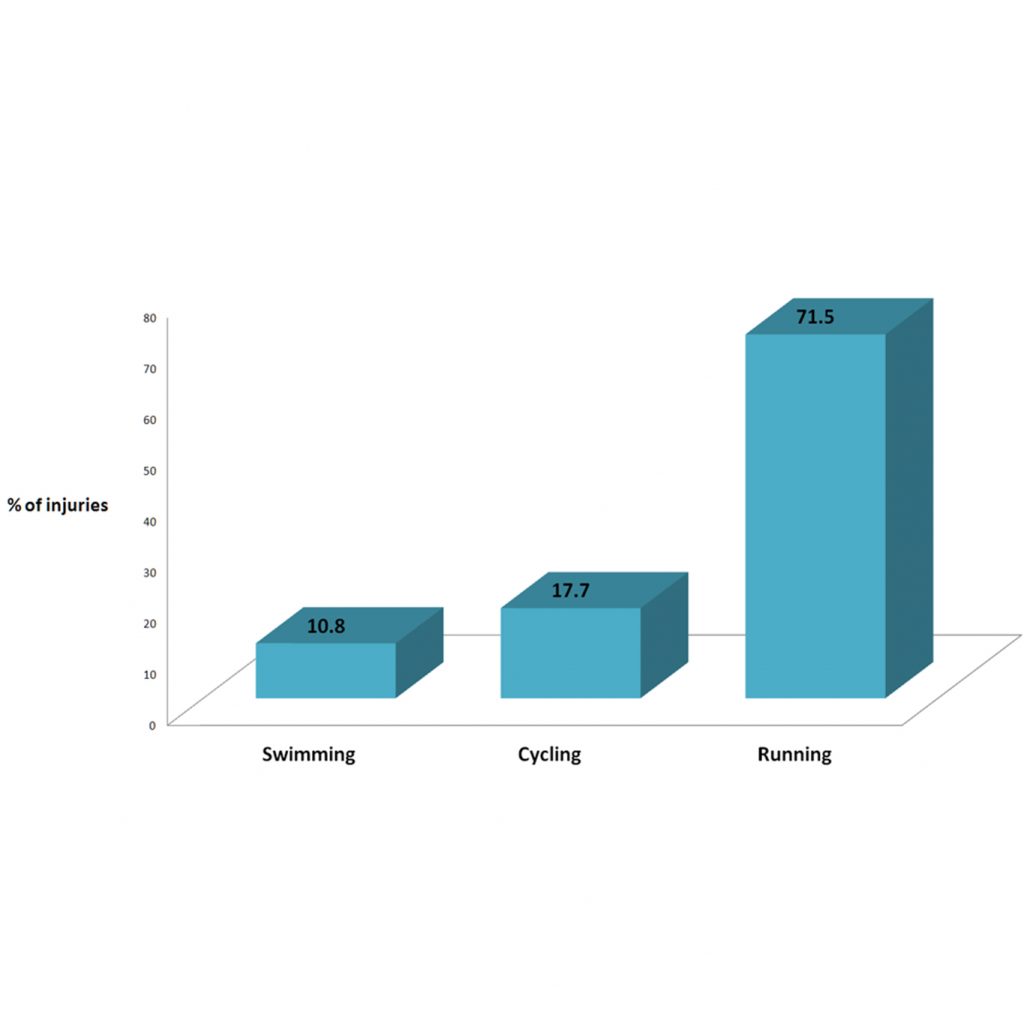 The first thing to point out is that running-related injuries comprised by far the biggest proportion of injuries. Factor in that triathletes tend to spend more time training on the bike than running, and the risk relating to running is more apparent still. According to the study authors, training errors, anatomical factors, training surfaces, and triathlon transition, and shoes can be all contribute to risk in triathlon running. Therefore, triathletes should pay keen attention to optimising whatever factors they can – eg ensuring the correct shoes that are renewed when cushioning and support declines, avoiding excessive hill training, downhill running and running on steeply cambered roads (which can increase the stress on the iliotibial band), and avoiding sudden increases in training distance or intensity.

This latter point is particularly important given overtraining was deemed the biggest risk factor for injury. In addition, it is recommended to practice ensuring smooth cycle-run transitions, as the impact forces during the early stages of the run are increased immediately after cycling. This occurs because the phase from concentric to eccentric contractions, when going from the cycling phase to the running cycle, is a delicate phase, which makes athletes more prone to knee pain during the first kilometres of running – as a result of the change between concentric contraction muscle activation in cycling to stretch-shortening activation in running.

Bike injuries were less common and acute injuries were most likely as a result of spills through loss of traction on the road or collisions. Overuse injuries were most related to improper racing bike set up, including the incorrectly sized frames, incorrect cleat pedal alignments, excessive saddle height, or saddles positioned too far back (set back). For all these reasons, triathletes (and all cyclists) should take time and expert advice from a professional on ensuring optimum bike set up. Most acute injuries sustained while swimming were related to crossing to close to the buoys during a race or incidents on the beach. The shoulder is recognised as the most frequent chronic/overload injury to affect triathletes training in the water.